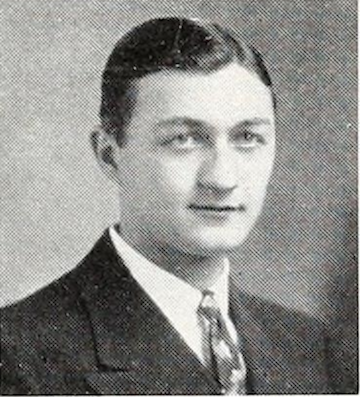 Circumstances of Rescue/Escape: "Staff Sergeant George R. Miller, a B-24 tail gunner from Woodbine, Pennslyvania, came down in France after bombing Mannheim on December 30, 1944. A 20mm shell from a German fighter had blown part of his turret out and wounded him badly. When he reached the ground, Miller could only crawl. French peasants [the Maquis (French Resistance)] took him to a civilian doctor and hospital. In his report Miller wrote, "I was taken right to the operating room. In the several months that I was there I had five operations which necessitated four blood transfusions. The nurses could not have taken better care of me." Never detected in the hospital by the Germans as an evader, Miller recovered sufficiently to make his way to Spain and back to the United Kingdom." (Lanning, Michael Lee. The Blister Club: The Extraordinary Story of the Downed American Airmen Who Escaped to Safety in World War II. Lanham, MD: Rowman and Littlefield, 2021, p. 80-81). George Richard Miller's full E&E (Escape and Evasion) Report is available online at the National Archives: https://catalog.archives.gov/id/5555488#.YYrX_3AItYE.link. In this report, the commanding officer commented, "Some evasions can only be explained by the simple word "GUTS.""

Additional Information: After WW2, George Richard Miller became an insurance agent and sponsored the immigration to the US of Paul Delbarre (one of his French teenaged rescuers): "Eighteen-year-old Paul Delbarre, who helped save the lives of 10 Allied airmen during the war, came to America yesterday on the French liner De Grasse to be the guest permanent, if he wants it that way of George R. Miller, of Woodbine, Pa., one of the men he saved. Met by Miller at Pier 88, North River and 4th St., young Delbarre. embarrassed by the attention of reporters and photographers, told how he had dragged Miller out of a tree-top and helped him to his mother's farmhouse nearby, where the flier was cared for until he could be smuggled out of the country to England. Nazi troops were quartered only "a few houses away," Paul said. Others rescued by Paul and his family included three other Americans, five Englishmen and one Canadian, the lad said. Miller said Paul was to live with him "as long as possible." (Daily News (New York City), 21 May 1949, p. 25). Miller and his wife also named their son born in 1945 after another one of his rescuers: Andre Dennis Miller.